In the past dimming light bulbs has been a fairly straightforward process. As long as your bulb was dimmable and you had a dimmer switch you were good to go. Since the advent of LED lighting the issue has become a lot more complex.

Firstly, not all LEDs are dimmable. You will notice when shopping for LED lights that some bulbs are non-dimmable while others are dimmable. This should be fairly self-explanatory, but it can't be stressed enough that if you intend to dim your lights, make sure the bulbs are dimmable, otherwise you might get a nasty surprise.

Fortunately there are a number of manufacturers who have made it their mission to create a range of dimmer switches that are compatible with LEDs and help remove the hassle from what should be a simple process.

Varilight are a household name in lighting control systems. They've been around for a while and have plenty of experience. More recently they have worked on developing the V-pro range, a range of low load trailing edge dimmer switches compatible with LED light bulbs. Important features of these dimmer switches include their soft start and low load, as well as surge protection.

A key issue with dimming LEDs is loading. Most dimmer switches have a min. load of about 50 watts. However, most LEDs use less that 10 watt of power. By reducing the min. load on the switches to 10 watts Varilight have gone some way to addressing this problem. The soft start on their switches also ensures the longevity of the bulb. LEDs are very sensitive to voltage change and the soft start helps alleviate any problems.

As might be expected V-pro switches are pretty standardised in terms of their design. They will fit ordinary back boxes and come in all the most popular finishes including white, chrome and brass, so you should always find something to fit your taste and home décor.

Perhaps the most popular item in this range is the 1-Gang Satin Chrome LED Dimmer Switch with its winning combination of traditional rotary switch and satin chrome finish, which seems to be one of the more popular choices for homeowners.

Alongside the V-pro range Varlight have developed the V-com range. V-com switches are a commercial grade switch with a much higher load suited to commercial lighting installation such as offices and shops. They are a little more expensive but they help address many of the logistical issues faced when dimming large quantities of lights. 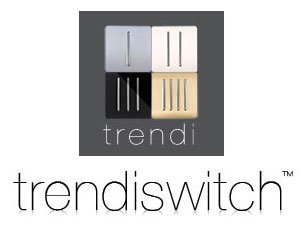 Trendi are the new kids on the block as far as switches and sockets are concerned. They've not been around for long, at least compared to other manufacturers like Varilight, but they have quickly made a name for themselves. Trendi have pioneered a new design which does away with the standard rocker switch and replaces it with a thin narrow switch that is both functional and stylish. These switches have already received recognition in the interior design industry and have received numerous occalades.

For convenience the switches are standard size and will fit a normal back box and come in four finishes – black, white, silver and gold.

It is hard to pinpoint which of these switches if the best in its range, but judging on sales, the 2-Gang Black Rocker Switch seems to trump all other. The black shiny finish seems to be indicative of a new trend in home decor with customers opting for a more modern minimalist feel.

Like Varilight, Lightwave are committed to producing switches that are compatible with LED Lighting. And, like Trendi, they have departed somewhat from traditional design replacing the standard rotary dimmer with two push buttons. The result is a range of stylish and functional dimmer switches suitable for most interior décor schemes and with none of the headaches traditional associated with dimming LED lights. Needless to say these switches are available in all the popular finishes such as white, chrome and brass.

As with the Varilight V-pro range we generally find that most customers opt for the satin chrome finish, which seems to be as popular as ever.