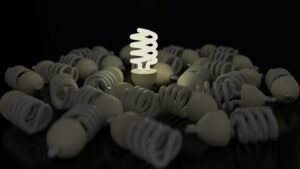 We all know how much better LEDs are compared to halogens and incandescent bulbs, but how do they measure up to CFLs?

There are benefits to using both CFLs (or Compact Fluorescent Lighting) and LEDs (also known as Light emitting diode) but which is better, and which is the best for your home?

There are two kinds of fluorescent lighting on the market at the moment, fluorescent tubes and CFLs. Tubes tend to be used in commercial lighting applications, while CFLs are more commonly used in domestic settings. Regardless both operate in the same way.

CFLs are filled with argon gas and mercury vapour, which they then pass an electrical current through. This produces visible light!

LEDs pass electrical currents through microchips, which produces light. They can take several forms, including single diodes (as seen in flash lights), a cluster of diodes (as seen in light bulbs) and they can even be built into fixtures!

Now we understand how both methods of lighting work, which one is better?

This is an area where LEDs are simply better than CFLs. Your average CFL has an expected lifespan of about ten thousand hours, while an LED typically settles around 15,000 to 30,000 hours. Some can even last for as long as 50,000 hours!

Note that the exact lifespan of any given light depends on a variety of environmental factors as well as who manufactured the bulb. Thus, there may be individual CFLs that last longer than any given LED, but as a rule, your LEDs will last longer. LEDs also feature integrated heat sinks, which makes them much less likely to suddenly burn out.

In the past, LEDs were associated with more specific directional lighting, while CFLs were good at producing more general lighting, making them a good option for larger rooms.

However, innovations in LED technology, such as new lenses, diffuser shapes refractors ensuring a wider spread of light, so it’s no longer an either/or situation. On top of this, CFLs tend to buzz, flicker and take a while to switch on, whereas LEDs do not, making LEDs a better option for offices and other places where you need to focus.

This is the key difference between LEDS and CFLs- LEDs are a lot safer! This is because CFLs use toxic materials (including mercury) as part of their construction. While this is perfectly safe in the day to day running of your lights, it can lead to some health concerns should your bulb break.

LEDs, by contrast, are made out of completely non-toxic materials. They’re also more durable, as a rule, due to their compact size. In addition to being completely safe, they are also easy to recycle because of this, so LED lights are green at every stage of life, not just when they’re running!

Both CFLs and LEDs are more efficient compared to traditional incandescent bulbs, so if you’re still using halogens or incandescent bulbs either one is a great upgrade for saving energy and money. In a direct comparison, however, LEDs win out, with LEDs typically using about half the watts of an CFL!

With all this in mind, while CFLs are a great upgrade to older light bulbs, LEDs are a much better choice!

If you want any more information, or need a helping hand with your order, feel free to get in touch with our friendly team. We can be contacted over the phone on 0116 321 4120, or you can send us an email to cs@wled.co.uk.